In this post, Rezence compares the Logitech G903 vs G Pro Wireless to determine which mouse has what features to make your wireless experience easier. You can find out in this comparison guide between these Logitech mouses.

This model is a wireless mouse that honors its name ‘Pro.’ It offers professional gamers quality, speed, and performance while remaining wireless. It is suitable for gamers of all levels, whether they are power users or not. This mouse will be too much for most people, but it’s perfect for some.

This wireless model uses a USB receiver to achieve extremely low latency, as its name suggests. Logitech G Pro Wireless comes with a charging cable that will change the wireless connection to wired when it is plugged into the computer.

You can use g Pro Wireless’s battery for 45 hours on a single charge. This makes it one of the most durable wireless mice batteries available. Logitech‘s G Hub software can turn off the RGB to extend the life of the G Pro battery. With only 80g, the G Pro mouse is the lightest on the market. This feature is a great option for people who need the lightest wireless mouse possible without sacrificing performance or size.

Logitech’s 16k Hero sensor is included in the G Pro. You can adjust it between 200 and 16,000. This sensor is perfect for professional gamers as well as casual users. Professional gaming is possible with the G Pro Wireless’s 400+ IPS tracking speed.

Logitech G Pro Wireless switches have a 50 million click rate. This is an estimate, and based on an average of 10,000 clicks a day, you can expect these switches to last for 14 years before they wear out.

Who Should Purchase The G Pro Gaming Wireless?

This mouse is for gamers looking for the best wireless mouse and willing to spend a premium.

Logitech’s G903 gaming mouse is a poor choice. Its performance is inferior to the G Pro wireless. The G903’s form factor and functionality are identical to any other Logitech wireless gaming mouse.

Logitech’s Lightspeed wireless technology is used in the G903 Lightspeed, which uses the PMW3366 sensors to achieve a latency of just one millisecond.

This high-end performance will be sufficient for most users. However, professional-grade wireless gaming mice like the G Pro wireless can now achieve sub-1 millisecond latency.

The G903’s battery life is decent at 24+ hours on a single charge. This can be extended significantly by turning off RGB lighting.

The G903 gaming mouse is heavy at 110g without the 10-gram clip-in. While casual users won’t notice the extra weight, serious gamers might. 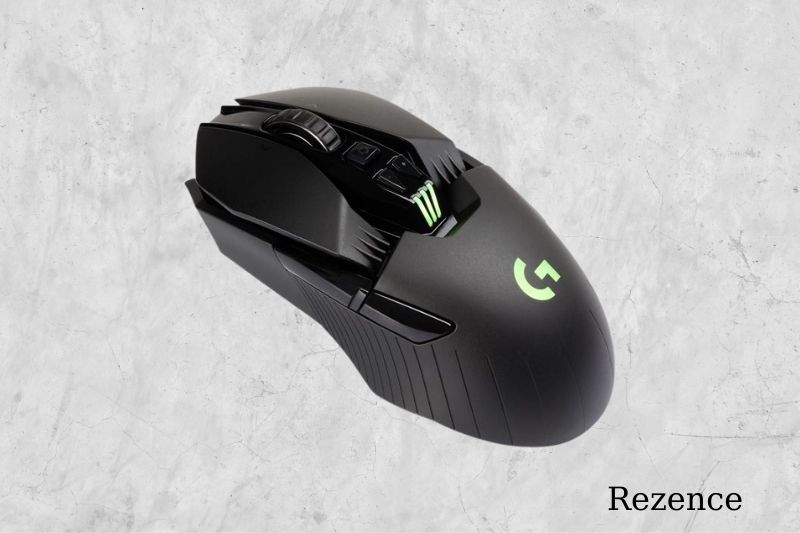 Unfortunately, the G903 doesn’t have a switch durability rating. There are many negative reviews about durability and double-click issues.

Who Should Purchase The G903 Lightspeed Wireless Gaming?

The G903 is not recommended for everyone, except those who love the design and form factor. In that case, you might want to pay more for the G903 Lightspeed Hero. Logitech’s wireless gaming mouse range has better mice at lower prices.

G703 Vs G Pro Wireless: Which Is Better And Why?

Razer Viper Ultimate Vs G Pro Wireless: Which Is Better in 2022?

Model O Wireless Vs G Pro Wireless: Which One Is Best To Buy? 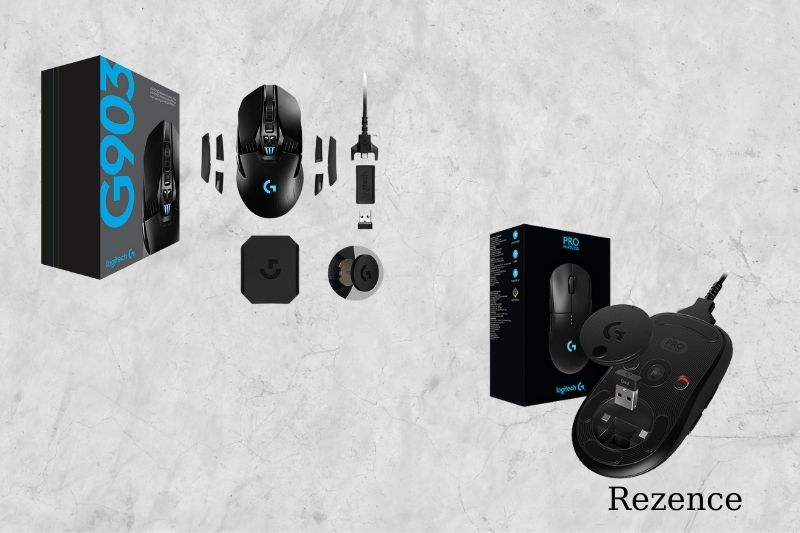 Logitech G903 mice and Logitech G Pro Wireless mice have very different looks. The G903 is a sporty gaming mouse with sharp edges and multiple lighting zones. The elegant, minimalistic G Pr is on the other side.

Logitech G903 indeed is an ambidextrous mouse. The design is symmetrical with identical features on both the left and right sides. The lower half of your mouse is free from the click buttons.

The mouse’s upper and lower sections can be seen, along with textured lines around the sides. This creates the impression that it is part of a peripheral device.

Two zones of RGB lighting can be programmed. The first is located in the middle of the mouse and appears as three small stripes. It’s just below the additional buttons beneath the scroll wheel.

The “G” logo is located on the lower portion of the mouse. Logitech G903 is for gamers who enjoy unusual, sporty mice with unique looks.

Logitech G PRO Wireless is an ambidextrous mouse. It features an asymmetrical design and similar parts on both ends. This mouse is more conventional and streamlined. The mouse has a classic shape with no protruding parts.

There are only three light dots in the middle and the backlit “G.” The mouse only has one RGB lighting zone to add some decorative touches to the mouse. This can be adjusted. Logitech G Pro Wireless is a good choice for those who prefer a discreet gaming mouse. 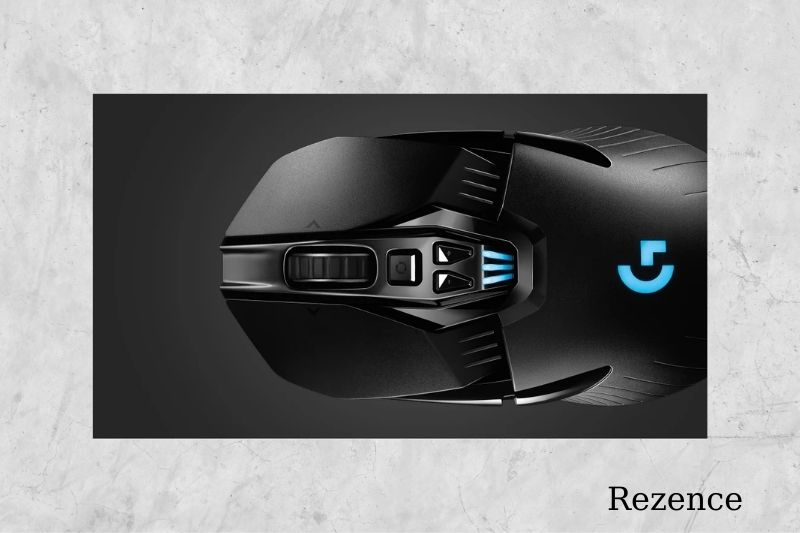 Logitech G903 and Logitech G Pro Wireless are pretty different in terms of comfort. They also have slight differences in the dimensions. You may find one mouse comfier than the other, depending on how you grip it.

If you want a heavier mouse for gaming, you can add this to the bottom slot. You will receive the covers to hide any side buttons you don’t want.

G903 will be more comfortable for those with large hands. The width of the G903 is ideal for palm grippers as it provides ample space for your palm.

The buttons are all within reach of your fingers. The ambidextrous design allows both left-handed and right-handed users to use the mouse to its full potential.

Logitech G Pro Wireless has a smaller footprint and is lighter. It measures 125mm in length, 63.5mm wide and 40mm thick. It weighs in at 80 grams. G Pro Wireless does not have an adjustable weight, unlike G903. This mouse is great for people who like lightweight mice.

The traditional Logitech G Pro Wireless shape is suitable for almost all grip styles. This mouse is excellent for those with small hands. This mouse is easy to use for both left-handed and right-handed users.

Magnetic caps are used for the side buttons and can be easily removed. The covers for buttons you don’t want are also included. 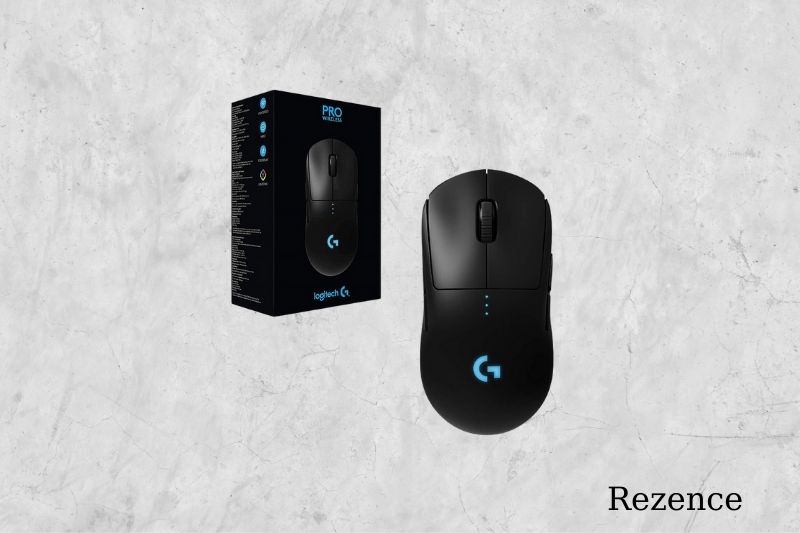 Logitech G903 has a scroll wheel that tilts left and right. The default settings for horizontal scrolling are the left and right tilts. However, you can adjust the functions through the software.

The scroll wheel has a button that allows you to switch between “notched” mode, which is for precise scrolling, and “free-wheeling,” which is fast, unlimited scrolling. This can be useful when scrolling through long pages.

Logitech G pro-Wireless has a standard scroll wheel, which is similar to the G903’s notched mode. You can tilt it left or right to scroll horizontally, and you can adjust the tilt functions. G Pro’s scroll wheels won’t let you quickly navigate through pages.

Both Logitech G903 and G Pro Wireless can be programmed via the Logitech G Hub Software. Different profiles can be created with different backlighting, button mapping, and sensitivity. You can save up to five profiles on each mouse.

Logitech G903 features two additional buttons on the left side and two on the right. Although it is possible for all buttons to be used, most people only use one of the buttons.

For assigning commands in different games, you can use the buttons on the sides. Logitech software allows you to map the keys yourself if the game does not allow for customization of the control layout.

These DPI buttons allow you to quickly adjust the profile of your mouse to match the game you are playing without needing to switch screens.

Logitech G PRO Wireless has two buttons to the side, one on each side and two on both the left and right. The customization process for this mouse is similar to the Logitech G hub software.

The DPI switch is not located on the top of your mouse. Instead, the DPI button is at the bottom. To change the profile, you will need to flip your mouse. It’s still very convenient to swap profiles before you play a game. However, it doesn’t allow for changing the DPI level immediately.

How does the Logitech Pro Wireless perform against the Logitech g903? The Lightspeed wireless technology is featured on both wireless gaming mice. It claims to offer near-zero latency and unrivaled speed and accuracy. Both gaming mice are responsive and precise in use without any delay or lag.

Two wireless gaming mice have mechanical buttons that can be pressed with precision and firmness thanks to advanced tensioning. They use different sensors. Logitech G903 generally performs better than another one.

Logitech G903 includes the trusted Pixart PMW3366 sensors. Professional players highly recommend it for many reasons. The sensor is extremely precise and accurate.

This sensor does not have any filtering, smoothing, or hardware acceleration. The result is that the performance is consistent and reliable in all situations, regardless of the sensitivity.

Logitech G Pro Wireless comes equipped with the Hero 16K sensor. The company claims that this sensor is also free from any filtering, smoothing, or hardware acceleration. G Pro Wireless users report that it doesn’t feel nearly as precise as G90.

It’s not as smooth and can be more jerky. It doesn’t feel good to use in games that require precision and accuracy.

Every wireless gaming mouse comes with a battery that can be charged using a USB cable. Both mice can be wired together with the USB cable to charge so that you don’t have to stop using them if they run out.

G Pro’s battery is significantly longer. With the backlighting on, it can last up to 48 hours. The battery life is approximately 60 hours without any backlighting. It can be used for travel and portable use.

Both mice are excellent choices and quite close, as we stated initially (a 3 to 2 ratio for the G903). Both mice have the same sensor and perform the same technique.

However, while the G903 has more customization options, infinite scrolling, and longer battery life, it is lighter and less expensive than the G Pro. We hope you find this helpful article and leave a comment if you have any queries.